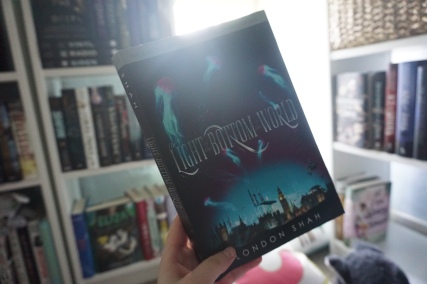 In the last days of the twenty-first century, sea creatures swim through the ruins of London. Trapped in the abyss, humankind wavers between fear and hope—fear of what lurks in the depths around them, and hope that they might one day find a way back to the surface. When sixteen-year-old submersible racer Leyla McQueen is chosen to participate in the prestigious annual marathon, she sees an opportunity to save her father, who has been arrested on false charges. The Prime Minister promises the champion whatever their heart desires. But the race takes an unexpected turn, forcing Leyla to make an impossible choice. Now she must brave unfathomable waters and defy a corrupt government determined to keep its secrets, all the while dealing with a guarded, hotheaded companion she never asked for in the first place. If Leyla fails to discover the truths at the heart of her world, or falls prey to her own fears, she risks capture—or worse. And her father will be lost to her forever.

I’m not the biggest fan of the beach and the ocean makes me itchy sometimes. Yet, I’m always drawn to ocean books. Especially underwater ocean books. I find something fascinating about the unexplored depths and all the fish and the mystery of it all. So, I was completely drawn to this book. Civilization is completely underwater. That’s pretty much all I needed to know to want to pick it up.

I really, really hate to say that this book was kind of meh for me. I think a lot of people will love it, there were just a lot of things I didn’t love about it. I just wanted more out of a lot of aspects of this book.

I did like some things about this book! The concept is absolutely mind blowing. The structure of this world is so solid and I found the whole thing so fascinating. I loved the watery world. The submarines are so cool. There’s a sense of both claustrophobia and freedom of being in the water and they both balance each other out really well. The technology needed to survive under such depths is so cool and I love how it played into the plot. Ah, this world is just so cool.

I didn’t love the writing. It felt a bit awkward (and kind of cringey at times (I’m sorry I’m sorry!)) to me. There were certain things I might have liked, but how they were written threw me off. I couldn’t get a clear picture of setting really easily. It felt really muddled and I couldn’t get a good grasp at what I was supposed to be seeing. It’s a lot to be to thrown into an underwater world and I wish more time was spent getting acclimated to how it looks and how it works. I felt a little unsteady in the beginning cause I couldn’t quite grasp what was possible and what wasn’t. I didn’t know how the new technology worked and what humans were capable of.

I thought there was going to be more submarine racing. It seemed like it would be a big part of the plot, but there was a lot less of it then I expected. And what was there was a bit confusing to follow since it couldn’t get a clear picture as it what was going on. Nevertheless, it was still neat to read. Submarine racing is cool by itself haha.

I actually didn’t really love the characters. Leyla was cool. I liked her, but again, they she was written threw me off a bit. There was so much other stuff going on that her development kind of fell to the wayside. I didn’t feel like I got to know her as well as I could have. Ari was alright; he’s a decent dude. And I wasn’t a big fan of the side characters. They sort of felt like they were just there. Some blended together and they just didn’t really stick out to me.

I am not a fan of what where the seasickness plot went. I don’t even think the whole thing is really necessary. And what it turns out to actually be is weird, for a lack of a better word, and I just don’t know how I feel about it.

There was plot twist after plot twist. There are so many lies. I liked some of them and some of them fell flat for me. I think only one was really shocking. Ah, it’s just the overall writing that influenced me feelings.

There is also a puppy! The puppy comes on all the adventures and doesn’t die! Though, she does suffer some injuries, but she heals.

I promise I didn’t hate this book! I know I’m talking a lot about the things I didn’t like, and I know there’s a lot of them, but I didn’t enjoy reading it! The world and the overall plot were interesting enough for me to say that I liked this book. The sea creatures, the submarines, and underwaterness were enough to keep me fascinated. The ending made me want to read the second book. There’s enough here that makes it a solid book with a solid story.

The Light At The Bottom Of The World comes out October 29, 2019! You can add it on Goodreads and pre-order a copy in the meantime!