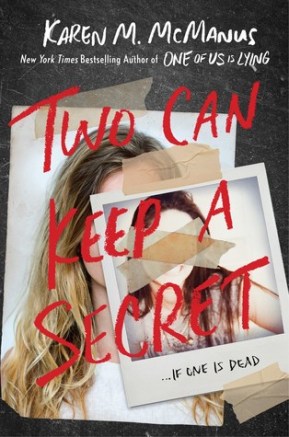 Echo Ridge is small-town America. Ellery’s never been there, but she’s heard all about it. Her aunt went missing there at age seventeen. And only five years ago, a homecoming queen put the town on the map when she was killed. Now Ellery has to move there to live with a grandmother she barely knows. The town is picture-perfect, but it’s hiding secrets. And before school even begins for Ellery, someone’s declared open season on homecoming, promising to make it as dangerous as it was five years ago. Then, almost as if to prove it, another girl goes missing. Ellery knows all about secrets. Her mother has them; her grandmother does too. And the longer she’s in Echo Ridge, the clearer it becomes that everyone there is hiding something. The thing is, secrets are dangerous–and most people aren’t good at keeping them. Which is why in Echo Ridge, it’s safest to keep your secrets to yourself.

I wanted to read this book to see if it had the same problems as One Of Us Is Lying. Even though mental illness was portrayed horrible and the queer rep was awful, I did enjoy the writing of that book and I liked everything else. So, I wanted to give this one a shot and see how it was. I listened to the audiobook, since I didn’t really want to hold it in my hands, and both narrators were really good!

Overall, this book was decent. There was no glaringly problematic content, which is a relief. The plot was solid, the characters were likeable, and the twists were good! Though, I just liked this book. I wasn’t blown away by it and I didn’t particularly love it. I have a harder time connecting with books when I listen to them, so that could be part of it!

I felt like this book wanted to have good characters and a good plotline at the same time, but it just couldn’t quite get there. Both fell short for me. Ellery was alright. I liked her and I liked her voice and I wish her character could have been fleshed out a little more. Malcolm had more of character arc. It was very plot driven, so that makes sense. And then all the other side characters were just side characters. I couldn’t quite get a grasp on them.

I feel like there were some character threads that started and had a lot of potential, but were sort of just dropped of along the way. I would have loved to see some of them play out and I think some would have made the story stronger. The romance aspect also felt a little thrown in there. It wasn’t focused on a ton, so I couldn’t quite get attached to the idea. Plus, I’m getting used to the awkwardness of listening to kissing scenes haha.

The plot took awhile to get going. I was five hours into the audiobook and not much had happened. It tried to flesh out the plot and integrate characters, but I just sort of felt like both of those were slipping through my fingers. It’s a bunch of small instances that lead up to the climax and a lot of times the plot relied on past, off page situations to keep things interesting. It worked a little bit, but I would have liked to see things progress more quickly or more than it did.

I felt like some of the dialogue was clunky and awkward. And not the kind of regular teen awkward, which I love. Sometimes Ellery would shot off questions that felt weird and kind of invasive and it just didn’t seem like something she would do.

Despite the plot moving slowly, when everything came to light and secrets were revealed, I could appreciate what was done. It was smart and the foreshadowing was spot on. It was creepy and gross and I got what the book was going for.

Overall, this book was alright. McManus is definitely a good writer and I think her future books will be really strong. Though I didn’t love this one, I did enjoy it!

You can add Two Can Keep A Secret on GoodReads and order a copy of your own!