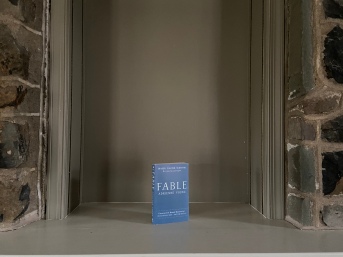 As the daughter of the most powerful trader in the Narrows, the sea is the only home seventeen-year-old Fable has ever known. It’s been four years since the night she watched her mother drown during an unforgiving storm. The next day her father abandoned her on a legendary island filled with thieves and little food. To survive she must keep to herself, learn to trust no one and rely on the unique skills her mother taught her. The only thing that keeps her going is the goal of getting off the island, finding her father and demanding her rightful place beside him and his crew. To do so Fable enlists the help of a young trader named West to get her off the island and across the Narrows to her father. But her father’s rivalries and the dangers of his trading enterprise have only multiplied since she last saw him and Fable soon finds that West isn’t who he seems. Together, they will have to survive more than the treacherous storms that haunt the Narrows if they’re going to stay alive.

I have a complicated relationship with Adrienne Young’s books. Her writing is beyond gorgeous, but I never quite love every aspect of the story. Something always falls short or doesn’t feel quite right to me. Nevertheless, ever since she revealed the first line of Fable (and the sequel Namesake) on Instagram, I was jumping at the bit to read them. I unfortunately missed a chance to get it at ALAMW, but a booth worker was kind enough to send me a copy after the conference was over, so thank you a bunch to them! Trigger warnings: grief, vomiting, blood and injuries