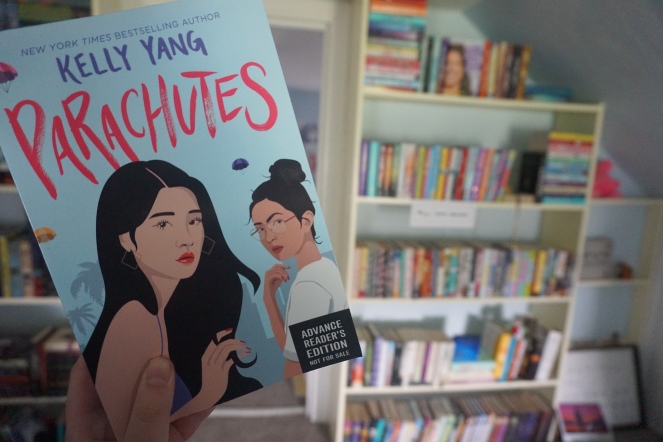 They’re called parachutes: teenagers dropped off to live in private homes and study in the US while their wealthy parents remain in Asia. Claire Wang never thought she’d be one of them, until her parents pluck her from her privileged life in Shanghai and enroll her at a high school in California. Suddenly she finds herself living in a stranger’s house, with no one to tell her what to do for the first time in her life. She soon embraces her newfound freedom, especially when the hottest and most eligible parachute, Jay, asks her out. Dani De La Cruz, Claire’s new host sister, couldn’t be less thrilled that her mom rented out a room to Claire. An academic and debate-team star, Dani is determined to earn her way into Yale, even if it means competing with privileged kids who are buying their way to the top. When her debate coach starts working with her privately, Dani’s game plan veers unexpectedly off course. Desperately trying to avoid each other under the same roof, Dani and Claire find themselves on a collision course, intertwining in deeper and more complicated ways, as they grapple with life-altering experiences. Award-winning author Kelly Yang weaves together an unforgettable modern immigrant story about love, trauma, family, corruption, and the power of speaking out.

I read this one on kind of whim. I asked a booth worker at ALAMW what it was about (you can do that and they’re excited to tell you!) and she told me it’s about rich teens being dropped off in America while their parents live in America and how a parachute and the teen she lives with navigate their lives. She also mentioned how it was heavier but didn’t read that way. (I just want to note this Nice Booth Worker pitched this INCREDIBLY well and is very awesome.) I decided I wanted to give it a shot. Trigger warnings: racism, rape, sexual assault

I usually have a bit of a hard time with heavier books. I feel those emotions so strongly and that makes it hard to read those kinds books. But, I do give them a try from time to time. This is one of the ones I am very happy I gave a try. I ended up loving this one a lot more than I thought I would. It’s just something special.

Kelly Yang is an incredible writer. This book reads so smoothly that it’s easy to fly through it. Yang knows what’s she’s doing with every word and she’s able to convey her messages so clearly. It’s just so obvious she’s so talented and so knowledgeable.

Sometimes it’s painful and sometimes it’s hard and sometimes there’s moments of true friendship and women discovering their strength. Really, it is so strikingly honest with everything that it does. It doesn’t hold back from showing the racism, the hardships of poverty, and sexual assault accusations shoved under the rug. I want to say it felt so real, but I feel like that word doesn’t do it justice. It’s true to life and it doesn’t shy away from that.

I really liked Claire and Dani. They were fantastic narrators. They’re so different from each other, but they also fit together so well. I liked how they came together, how their relationship blossomed even throughout the hardships they faced.

I think I want to talk about emotional development, but it kind of didn’t register when I was reading, but in the best way. I wasn’t thinking about how the characters were developing, because they just were. They were going through life and their actions and feelings were so spot on that I couldn’t question anything they did. Even if their actions were questionable, I completely got where they were coming from.

There was so much that happened in this book, that there were some times that I didn’t see how certain things were getting done. For example, I couldn’t quite see when Claire was getting her homework done. She was so busy doing other things! This is kind of a minor thing, but it is something I noticed haha.

This book was hard to read. It doesn’t make any promises; it shows the world as it is. But I am very grateful that I read it. It’s life and it’s truth. If you feel like you can handle it, I truly, truly recommend giving it a try!

Parachutes comes out May 26, 2020! You can add it on Goodreads and pre-order a copy in the meantime!