Cerys is safe in the kingdom of Aloriya. Here there are no droughts, disease, or famine, and peace is everlasting. It has been this way for hundreds of years, since the first king made a bargain with the Lady who ruled the forest that borders the kingdom. But as Aloriya prospered, the woods grew dark, cursed, and forbidden. Cerys knows this all too well: when she was young, she barely escaped as the woods killed her friends and her mother. Now Cerys carries a small bit of the curse—the magic—in her blood, a reminder of the day she lost everything. The most danger she faces now, as a gardener’s daughter, is the annoying fox who stalks the royal gardens and won’t leave her alone. As a new queen is crowned, however, things long hidden in the woods descend on the kingdom itself. Cerys is forced on the run, her only companions the small fox from the garden, a strange and powerful bear, and the magic in her veins. It’s up to her to find the legendary Lady of the Wilds and beg for a way to save her home. But the road is darker and more dangerous than she knows, and as secrets from the past are uncovered amid the teeth and roots of the forest, it’s going to take everything she has just to survive.

I’ve been excited for this book since it was announced along with the sequel to Heart Of Iron. It’s Ashley Poston, which is basically all I need to know to pick up a book. But this had so much more than just be written by Ashley Poston. A Beauty And The Beast retelling with a sexy fox and a creepy woods. I was so excited for it that I was literally hit with a wave of dizziness when I saw it was up on Edelweiss. And then I absolutely completely freaked out when I was approved. Yes, I was very, very excited haha.

Boy oh boy, did this book meet and exceed my expectations. I love it just as much as Heart Of Iron, and that’s saying something. It’s the kind of book I couldn’t wait to write a review for, so I could scream my thoughts and share my love, but was nervous about writing too. I want to do this book justice and it’s the kind of book that seems makes all words that try to describe it flutter off into the wind. So, I’m going to try and inject ever ounce of love I have into this review, but just know that I love this book with my whole entire book.

First off, this book feels like a fresh spring breeze caught between words. It’s like if a flower bloomed inside your heart and decided that was its new home. It’s absolutely gorgeous. It’s all flowers and roots and blooming.

Speaking of flowers and roots and blooming, let’s talk about the setting. This is one of the most unique creepy woods stories I’ve read. It’s terrifying, but there’s such a beauty to it. Yes, there’s thorns and brambles and monsters with too long limbs and red eyes, but there’s also bees and flowers and nice motherly bears. Even for the terrifying parts, it’s sort of something you’re in awe of.

This book also managed to make it’s world seem extremely vast, but also have that small town, Beauty And The Beast quite village feel. Cerys’s home is small, but it’s surrounded by so much. It felt like a small cocoon of home and warmth, surrounded by the vastness of everything else.

Alright, before I explode I’m going to mention how this was a Beauty And The Beast retelling. And how it was an absolutely fantastic one. Ashley Poston is an absolute master at Easter Eggs. It so fantastic when I come across one of them. I’m like “THERE, I KNOW THAT REFERENCE”. There’s also smaller nods the original that I didn’t notice as quickly. But let me tell you, when I did notice them, I realized how brilliant they were. This book took Beauty And The Beast and turned it into something original and something it’s own. It’s a fantastic retelling.

ALRIGHT NOW FOR THE STUBBORN GIRL AND THE SEXY FOX. Cerys surprised me. She was stubborn and brilliant, with a blood full of magic, figuratively and literally. Though she’s also human. She gets scared and she gets unsure. All this wrapped up together to make a really fantastic person and someone I just really wanted to hug.

Poston was not kidding when she said this book had the sexiest fox. Because it certainly does. Fox surprised me too. It’s so easy to fall in love with him and his antics. He’s sarcastic and mischievous. But he’s also kind and struggles with dealing with fear. I don’t want to go too far into his story for fear of spoilers, but I loved his development.

I even fell in love with the minor characters. They were so easy to love and so easy to become invested in.

There was also so much casual queerness in this book. A wedding of two women and a two girls blushing at each other.

Ashley Poston is an incredible writer. I fall into her words so easily and I never want to pull myself out. Her writing makes this story as incredible as it is. She knows how to pull your heartstrings, make tension tighten your body, and fear pump through your veins. When I got the end of the prologue I literally couldn’t help but gasp out loud at how brilliant it was. Same with the very, very end (WHICH I CAN’T TALK ABOUT BECAUSE OF SPOILERS BUT PLEASE KNOW IT WAS BRILLIANT).

I mean, this book had a plot too. And it was just as good as everything else I’m rambling about. There’s secret cities in the woods, treks through the forest, corpses walking, motherly bears, crowns obtained through lies, beasts stalking through the woods, and two dorks trying not to be awkward with each other, while trying to save what they hold dear. It’s suspenseful, it’s full, and it’s brilliant.

So, I loved this book, if that wasn’t obvious. I’m very happy to add another book by Ashley Poston to my “scream about until the end of days” list. It’s seriously that good.

Among The Beasts And Briars comes out October 20, 2020! You can add it on Goodreads and pre-order a copy in the meantime! 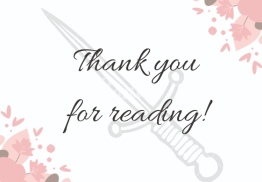 One thought on “Among The Beasts And Briars by Ashley Poston”