*Spoiler free, but spoilers for The Merciful Crow* 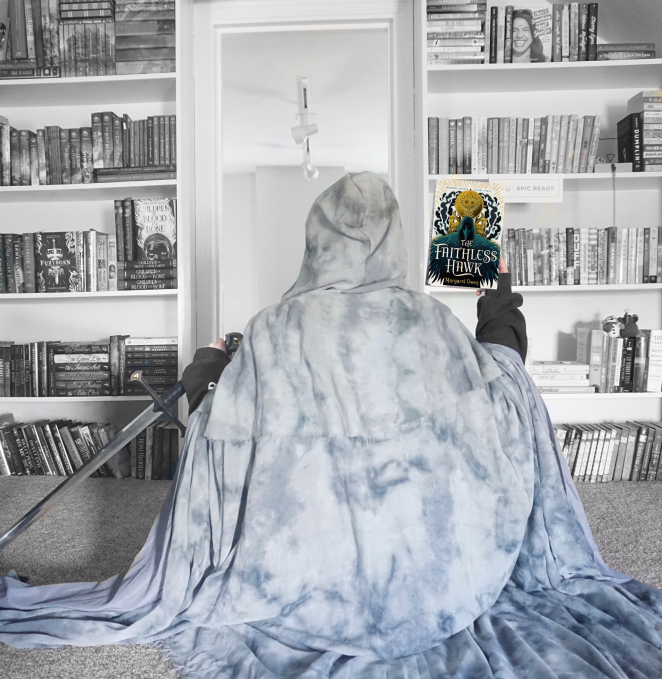 Is it acceptable to start this off with just me screeching? Because I feel like that truly encapsulates my feelings about this book. I had complicated feelings about The Merciful Crow, but I ended up loving it deeply. I was very much looking forward to the sequel for more teeth, more anger, and more cats!

My love for this book burns so fiercely. It’s another one where I want to talk about so much, I want my words to describe how this book made me feel, to truly capture how good this book was, how strong, and how wonderfully written. Seriously, this book was all kinds of incredible.

First off, the worldbuilding in the first book was a bit confusing. I sort of just ended up going with the flow and just accepting rules for things were there because they were there. I found it 10x easier to follow along with it in this book! I felt like it was explained so much more clearly and concisely and I actually understood where pieces of information fell into the framework of the world. It’s like a lot of things clicked into place. I’m still not quite sure the exact hierarchy of the castes, but that’s fine haha. Everything else was made a lot more clear.

In the first book, I also felt like it should have been aged up to Adult or New Adult. In this one, it felt very firmly YA. The characters felt their ages and I feel like it settled into its YAness, which is something I really appreciated.

Alright, alright, alright, it’s time for some gushing. I’ll start off with the writing. DANG DOES OWEN KNOW HOW TO WEAVE WORDS TOGETHER. The writing style worked so perfectly with what this world was and who the characters were. There were multiple times where I had to stop reading because a line just made me overcome with emotion, either my heart breaking into a million pieces, my heart squeezing with sweetness, or admiring the brilliance of what was happening. Seriously, this book is written so brilliantly and it’s amazing.

I have so much love for Fie, Tavin, and Jas. Fie is still as angry as ever, still full of grit, and still willing to claw her way out of trouble. She’s just a ball of fire and I love her so much. She struggles with the weight of obligation that’s place upon her shoulders and how she never feels safe in her world. What she carries is much heavier than the first book, but it was just as well done. Fie has to claw her way through this book and it was something to behold. I feel like talking about Jas and Tavin would move quickly into spoiler territory, so I’ll just say that they are still wonderful. Their characters are very different in this book and I grew to love both of them in different ways. Jas really blossomed in this book and it was great to see him come into his own.

The romantic relationship, oh the romantic relationship, how it makes my heart want to burst. I’m going to quickly talk about the one thing I didn’t like and then move on. I felt some feelings moved very quickly from the first book to the second book. It wasn’t necessarily a bad thing, but I would have liked for more of a slow burn! Alright, that being said, I LOVE THE ROMANTIC RELATIONSHIP SO MUCH I LOVE THEM SO MUCH. Seriously, it’s so sweet and they respect each other so much and they want to protect each other and to safe and happy and I just love them so much. I have to tread very lightly here, but let me just tell you that Owen is a mastermind. Alright, I’m gonna be quiet on that for now.

I think I will always love this world. It’s harsh and brutal, but the characters it’s filled with are some of the best. I loved the magic, with all it’s teeth. I loved how the mythology was expanded upon, along with the Sinner’s Plague and what it truly means. It’s gritty, but there also points of good in it as well.

Just, I love this duology so much and I loved this book so much. Hopefully I was able to capture that love at least a bit haha. This book is so incredible.

The Faithless Hawk comes out July 28, 2020! You can add it on Goodreads and pre-order a copy in the meantime!

4 thoughts on “The Faithless Hawk by Margaret Owen”