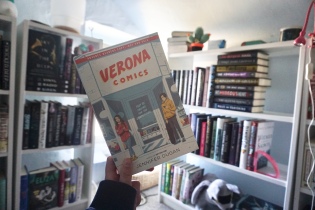 Jubilee has it all together. She’s an elite cellist, and when she’s not working in her stepmom’s indie comic shop, she’s prepping for the biggest audition of her life. Ridley is barely holding it together. His parents own the biggest comic-store chain in the country, and Ridley can’t stop disappointing them–that is, when they’re even paying attention. They meet one fateful night at a comic convention prom, and the two can’t help falling for each other. Too bad their parents are at each other’s throats every chance they get, making a relationship between them nearly impossible . . . unless they manage to keep it a secret. Then again, the feud between their families may be the least of their problems. As Ridley’s anxiety spirals, Jubilee tries to help but finds her focus torn between her fast-approaching audition and their intensifying relationship. What if love can’t conquer all? What if each of them needs more than the other can give?

This book was on my radar as one that I wanted to reader eventually. For some reason I thought it was a Middle Grade for awhile and then a comic book for awhile, but it is YA! But, my friend was super excited about it (then read and loved it), so I learned what it was actually about! The two main characters are falling for each other when their parents are rivals in the comics industry. And that one of them has anxiety! So, it was bumped up into something I definitely wanted to try out. Trigger warnings: anxiety, depression, suicidal ideation, abusive parents

My feelings towards this one are extremely complicated. I know I say that with so many books, but they’re really tangled up here. I went into this book thinking it was a fluffy romance. It was marketed that way and the cover definitely leans into that. It’s not that at all. Yes, the romance has it’s cute parts and the characters are both wonderfully adorable, but this book deals with a very heavy mental illness plot. Honestly, it was hard for me to read. Not to read, but emotionally, and I don’t think in a totally good way.

I don’t want to bash it at all because I thought it was incredibly well done. It was raw and it was real and it was incredibly messy. Ridley is the one struggling with mental health and I think it’s so great so see a male character who has anxiety. I just really wish there were trigger warnings at the beginning. Ridley struggles majorly. His parents are absolute jerks (seriously, throw them into the sun), he has major anxiety, and he has no support system. It’s not cute and fluffy. It’s heavy and it’s hard sometimes.

This also bleeds into the romantic relationship. It didn’t feel entirely healthy to me the whole time. There was a few lines about it being a co-dependent relationship at the end, but I felt like it should have been addressed more. It was like a good chunk of the book happens in a big haze of anxiety and unhealthy habits, and then suddenly everybody walks out at the end. Everything’s not magically fixed at the end, but it felt like there could have been more development. I know that’s not always how real life works, but it just felt kind of flat to me.

I definitely don’t want to say I hated this book. It just really, really wasn’t for me. There were some things that I liked! I did love Ridley. He’s so sweet and deserves so much more than what he has. Even though it was hard, I did like reading his POV a bit. Jubilee was also a cool character. I would have liked for a bit more out of her character. I’m not sure what though, haha. Still, she was cool and she’s a cellist, which I find fascinating.

I also really liked the comics aspect to this book! I would have liked for the book to be a bit more comicy, but I still liked the comics that were there. They felt comforting and I just think they’re really cool.

I know I’m supposed to have an opinion on books, that’s what I do, but I truly don’t feel like I have an opinion on this one. It made my emotions rise in a negative way, but that’s purely how I felt. I don’t think it was an inherently bad book, so please give this book a chance if you feel like you can handle it. But please also be aware that this book is incredibly painful to read at times and is a lot heavier than it looks.

Verona Comics comes out April 21, 2020! You can add it on Goodreads and pre-order a copy in the meantime!