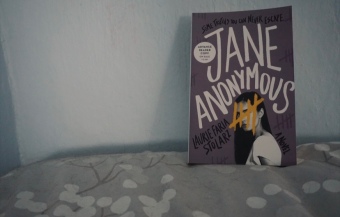 Then, “Jane” was just your typical 17-year-old in a typical New England suburb getting ready to start her senior year. She had a part-time job she enjoyed, an awesome best friend, overbearing but loving parents, and a crush on a boy who was taking her to see her favorite band. She never would’ve imagined that in her town where nothing ever happens, a series of small coincidences would lead to a devastating turn of events that would forever change her life. Now, it’s been three months since “Jane” escaped captivity and returned home. Three months of being that girl who was kidnapped, the girl who was held by a “monster.” Three months of writing down everything she remembered from those seven months locked up in that stark white room. But, what if everything you thought you knew―everything you thought you experienced―turned out to be a lie?

I’d seen this book around here and there, and it sounded pretty interesting. I was planning on picking it up sometime, BUT I GOT AN ARC IN THE MAIL! It was my first unsolicited ARC, which is very exciting. I was super pumped to get a package from WednesdayBooks, but I wasn’t expecting this book! So, I jumped on the chance to read it. Trigger warnings: self-harm, captivity, emotional manipulation, implied rape/assault

I’m not quite sure how I feel about this book. It was interesting, but that’s pretty much all I enjoyed about it. Not to say that it was bad or that I hated reading it, but all I felt while reading it was interested and curious. I wanted to know the secrets and that was basically it. I might just not be a thriller person. I haven’t loved most the thriller’s I’ve read, so maybe the genre just isn’t for me! I enjoy the writing, but I don’t completely fall in love with the story.

Alright, to start off I want to talk about the text talk, mostly right in the beginning. I don’t want to to say no teens text like that, because I can’t speak for all teens haha, but wow did it seem off. It was so awkward, with borderline cringey abbreviations. I threw me for a loop.

The emotional story and the suspenseful story didn’t quite line up for me. I think it was trying to be deep and meaningful, but it just didn’t get there for me. I think that was a big thing for me; a lot of things just didn’t line up. There wasn’t enough emphasis on Jane’s emotional story; it seemed like we just skimmed the surface, when there was so much more underneath. I would have liked more and I can sort of see where there could have been more. It was like emotions were sprinkled here and there, when they could have been deep rooted. The journey felt so scattershot and I couldn’t quite get where Jane was coming from or her thought process at some points. It’s like she was randomly healing at some moments, but completely lost in others. I know trauma is a fickle thing, but this didn’t feel like that. It felt like random development moments here and there, because something had to happen and that’s where they were supposed to go. There were things that could have connected, but didn’t. There were things that didn’t quite follow through. It just left me kind of frustrated.

This book is also told in dual timelines. Then and Now. Then, leading up to and when Jane is being held captive. Now, after Jane has escaped. They merge towards the end, but I honestly couldn’t have told you when that was without the chapter headings. They could have merged in a great way, but they sort of just passed each other by.

I don’t want to call the “reveal” or “twist” those things because it feels like more than a plot development. Plus, it seems kind of insensitive (?) to call this horrible thing happening just a plot device word. It was an extension of the story. I guess that’s something the book did well! This horrible thing felt like the work of a twisted mind, not like something used for the book.

Also, everyone in Jane’s life was horrible. Her best friend wanted to talk to her about how it was so hard for her when she went missing because she felt guilty and how it was hard for her when she came home because she didn’t know how to help her. Her mom wants her to be normal, act normal, be normal, and doesn’t listen to her when she’s having a hard time. But it’s never addressed? It’s sort of pushed to the side and never dealt with. It made me so mad how Jane never had someone supportive to help her.

I think the biggest thing for me was how I could see where this story could have gone so much deeper. When Jane is held in captivity, the time sort of slips past, when it could have been halting, with hard stops, and lots of emphasis on Jane’s thought process and emotional state. Jane’s healing process could have been slow, with setbacks and successes, instead of random things thrown in here and there. The emotional storyline was a big hangup for me. The suspenseful story, while good, sort of took over.

I didn’t hate this book, even though I know it sounds like it haha. I just wasn’t for me. It’s interesting and I wanted to keep reading. The writing pulled me along and the story kept me engaged until the end. I also learned how to spell anonymous. But everything else was a little off for me. I didn’t quite get this book. Which is fine! Because I know other people will and I hope they find it and love it.

Jane Anonymous comes out Janurary 7, 2020! You can add it on Goodreads and pre-order a copy in the meantime!