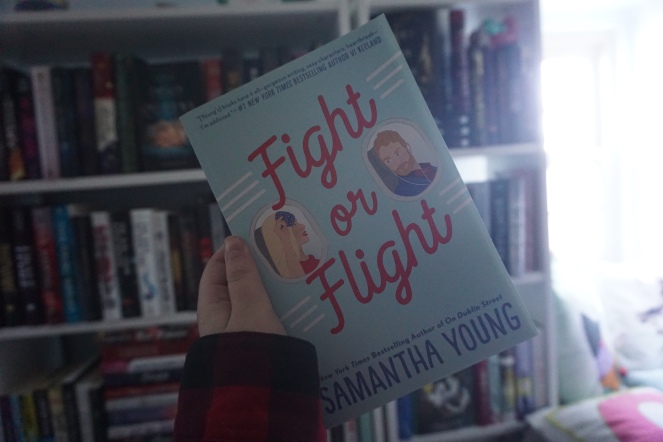 The universe is conspiring against Ava Breevort. As if flying back to Phoenix to bury a childhood friend wasn’t hell enough, a cloud of volcanic ash traveling from overseas delayed her flight back home to Boston. Her last ditch attempt to salvage the trip was thwarted by an arrogant Scotsman, Caleb Scott, who steals a first class seat out from under her. Then over the course of their journey home, their antagonism somehow lands them in bed for the steamiest layover Ava’s ever had. And that’s all it was–until Caleb shows up on her doorstep. When pure chance pulls Ava back into Caleb’s orbit, he proposes they enjoy their physical connection while he’s stranded in Boston. Ava agrees, knowing her heart’s in no danger since a) she barely likes Caleb and b) his existence in her life is temporary. Not long thereafter Ava realizes she’s made a terrible error because as it turns out Caleb Scott isn’t quite so unlikeable after all. When his stay in Boston becomes permanent, Ava must decide whether to fight her feelings for him or give into them. But even if she does decide to risk her heart on Caleb, there is no guarantee her stubborn Scot will want to risk his heart on her….

Another book in my “read more romance books” venture! It sounded like it had enemies-to-lovers, chance encounters, and stubborn characters unwilling to open up. It sounded like something I would enjoy, but with some thinks I was unsure of. It sounded more emotional and I don’t think I’ve read a friends with benefits story before. So, I put off reading it for awhile, but I promptly forgot about the things I was worried about and just started it because I wanted to read another romance book haha. Trigger warnings: emotional and physical abuse, talk of abortion

I did enjoy this book. It wasn’t quite what I was expecting and it definitely different than the other romance books I have read. It did have a lot of high points, but there were a few things I didn’t love.

The writing was one of the things I really enjoyed. It was very, pretty is the best word I can describe. It wasn’t overly flowy or flowery or anything, it just made everything seem very clear. Kind of like you’re putting on glasses after a lifetime of needing them. It seems bright and everything is very stark.

The sexual tension, frustration, and emotions between Ava and Caleb were cool. I don’t think I’ve read a book with a friends with benefits arrangement before, so this was new for me. But I liked seeing it play out. Their relationship progressed in a different way than I’m used to seeing. They despised each other, they were physically attracted to each other, and they built a friendship. It built on itself very nicely.

I always feel so weird talking about sex scenes, but I guess I’m going to anyway. There’s a longer one in the beginning and then pretty much all of the ones following that are kept short and to the point. For me, being demi, I kind of wished there was a longer one once they had built their emotional connection. Also, it felt kind of unbalanced with there only being one longer one in the beginning. It was like it kind of just fell off. I dunno, it felt weird to me, kind of like how it feels weird to talk about it haha.

I really, really liked how every single character felt human. They had flaws, and the book is not afraid to point them out. The characters have low points. I just really liked how that was showcased so clearly. Nobody is perfect and everybody has their own things to work through. Ava has a need to be perfect. Caleb is afraid of commitment. Even the side characters (I adored Harper, Jamie, Stella, and everybody else) had their own things. They had their lives and struggles.

While I love emotional development and emotional turmoil and figuring things out emotionally, I didn’t quite love how Ava’s emotional plotline played out. It felt like a weird modge podge of emotion and not in the good, messy, human kind of way. I didn’t quite get what message was trying to be sent. There was one thing said at one point and another said at another point. I liked them both, but I felt like they weren’t interconnected enough. I would have loved it if it had been focused on more and I could really have gotten a feel for how Ava is coming to think about things.

Though, there was a lot of emotional development throughout the entire book, for all the characters. They are all carrying their own traumas. This was surprising for me, since I didn’t expect it. But I liked how it delved deeper into the characters’ feelings.

The last couple of pages also felt a bit off for me. They weren’t rushed, but I felt like they were clumped together. It felt weird out it ended and I would have liked for things to be smoothed out a bit more.

Overall, I liked this book. The relationship was sweet and it felt real. It felt like they really cared about each other and I liked seeing their relationship grow. There were a few things that I wasn’t the biggest fan of, but I still really enjoyed it.

You can add Fight or Flight on Goodreads and order a copy of your own!