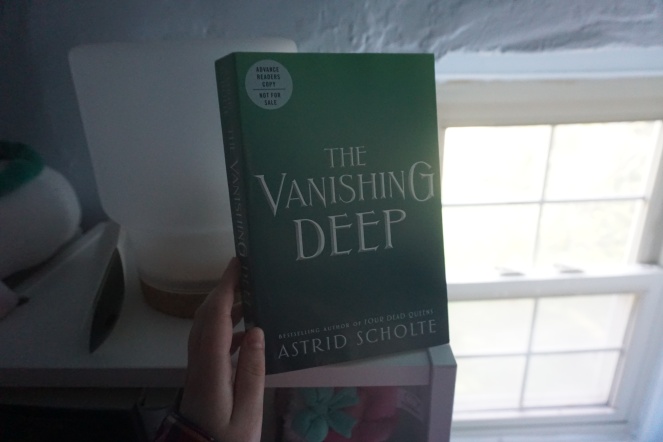 I enjoyed Four Dead Queens and I’ve been looking forward to seeing what her other books could hold. And I knew it was going to be an ocean book and despite my dislike of the beach, I always feel drawn to ocean books. Plus, it’s a sister book. A sister book where one is trying to revive the other. And breakouts out of facilities while the employees chase them and it’s filled with secrets. Trigger warnings: death, vomiting, grief

I really loved this world. I’m finding that ocean worlds are kind of hit or miss for me, and I found this one fascinating. I feel like it took a really realistic stance on how this world came to be and it considered the nuances of this world really well. Like weight limits. Only so many people can be apart of the certain floating communities to keep them from sinking. Plus, I loved Tempest diving through the depths and going through the ruins of the old world. And there’s so much salt that it crusts people’s eyes shut when they sleep and there’s a disease called crystal lung because of all the salt in the air. The communities are so are oceany and I loved how they lived in their world.

Though, I felt like some of it could have been explored more. It felt like there were aspects that I were expecting to be darker and I felt like had more potential. The plot twists relating to world aspects didn’t really shock me. But, I think this is because there were other things going on. There was a lot of aspects that had a lot to them, so they all didn’t have room to fully breath.

I really liked Tempest. She’s a fantastic water witch (not really, but that’s a nickname haha). She’s fierce and she’s stubborn and she’s dealing with so much. I wasn’t expecting to like Elysea so much, but I did. I loved how she and Tempest interacted I loved their relationship. Raylan was more of a minor character, but I still thought he was cool! Lor was interesting. I still don’t quite know how I feel about him. I like him, but I’m not sure how I feel about his actions. I feel like his emotional plotline could have been fleshed out more. His feelings were confusing, in a realistic way, but I would have liked to see him try and figure things out more. And it was different where his character went and I would have liked the ending to be longer, but I think I liked it.

This book is really emotional. It deals with the loss of loved ones. And being able to to see them again for twenty-four hours. I feel like those feelings could have been focused on more, but that’s just me!

I’m usually not a huge fan of books that take place over such a short period of time. But I felt like this one does it really, really well! It’s packed full of emotions and worldbuilding and character development. So much happens, but it doesn’t feel rushed. It’s done really well.

I felt like some of the twists could have been done a bit better. They didn’t seem as shocking as I thought and I guess I was expecting something more sometimes. But, the last one was pretty awesome. I definitely wasn’t expecting it!

Astrid Scholte is such an amazing writer. The writing was beautiful, the world was so expansive and I was so intrigued with all of it. And I loved Tempested and I enjoyed seeing her navigate everything. I’m definitely looking forward to seeing what Scholte writes next!

The Vanishing Deep comes out March 3, 2020! You can add it on Goodreads and pre-order a copy in the meantime!