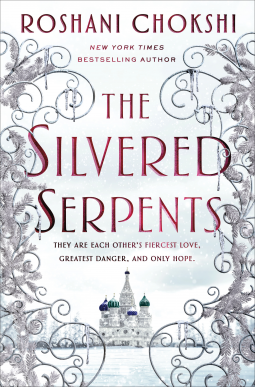 I really, really loved this book. I loved it a lot more than the first one. Everything that I didn’t really enjoy in The Gilded Wolves seemed to be nonexistent here. I might have had a few issues here and there, but everything else was so amazingly good.

I’m the first book, I found the writing to be kind of heavy in a way. It felt like it was almost too much. The descriptions, the explanations, and everything felt like it was packed so full it was close to bursting. In this one, it evened out a lot. It has the same magical feel to it, but it didn’t feel so heavy. The descriptions were gorgeous and I felt like I could see the world more clearly. The setting felt solid and I connected with the characters more.

Speaking of characters, I LOVE THEM A WHOLE LOT. I kind of just liked them before, but WOW I LOVE THEM NOW. I’m always worried with this many POVs, how everything is going to balance out, but it’s done so well here. They’re all so distinct and they all feel so themselves. I adore Enquire and his adorableness and his love for history. I completely love Zofia and her steadfast logic and her love of sugar cookies. Hypnos is hilarious and just wants to belong. Laila is her own person and she is completely capable of whatever she wants to do. And Sèverin has so much turmoil and is holding onto so many secrets. He wants to protect the people he loves so much that it’s almost like it warps his mind.

There’s also new characters. I can’t say much because I don’t want to spoil anything, but they’re great. I loved who they turned out to be and I can’t wait to see how they turn out.

I found the setting so cool. I don’t know how much I want to say ah! But I was icey and so full of amazing things. I found it fascinating.

Going into this book, I didn’t remember much from the first book. So it took me awhile to get into, but I found I was able to pick up quickly what was going on! But, I still don’t quite know what’s going on with all the Houses and how this world is structured. Nevertheless, it’s really cool and I like it!

I found a portion of this book, right after the beginning and right before the middle, to a bit boring. I dunno why, but it felt like things were dragging there. But, things picked up and they didn’t slow down. I also felt like there was a lot of historical information that was presented very quickly. It’s probably just a me thing, but I found it hard to wrap my head fully around some of it. I found it interesting, but I had a hard time remembering all the small details. I think I’ll just leave that job to Enrique haha.

The relationships were truly something to behold. There are so many, good and bad, and they are all so well done. Feelings are complicated and there’s malice between people and love between others. Ah, some of it was just so complicated in the best possible way.

I’m not 100% sure how I feel about the ending, but I’m pretty sure I loved it. It ends and you know stuff but characters don’t know stuff and there’s only a small time until they know stuff but it ends and what if something happens! And then there’s the weird mindsets of characters and you don’t quite know what people are thinking, but it’s going to be great to find out but you have to wait to find out.

This book is brutal and full of feelings and dripping with magic. It’s so, so good. It has amazing characters and so many feelings. I highly, highly recommend it.

The Silvered Serpents comes out February 4, 2020! You can add it on Goodreads and pre-order a copy in the meantime!

4 thoughts on “The Silvered Serpents by Roshani Chokshi”