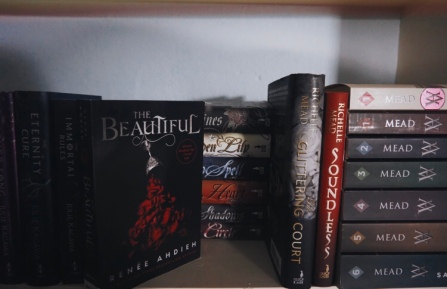 In 1872, New Orleans is a city ruled by the dead. But to seventeen-year-old Celine Rousseau, New Orleans provides her a refuge after she’s forced to flee her life as a dressmaker in Paris. Taken in by the sisters of the Ursuline convent along with six other girls, Celine quickly becomes enamored with the vibrant city from the music to the food to the soirées and—especially—to the danger. She soon becomes embroiled in the city’s glitzy underworld, known as La Cour des Lions, after catching the eye of the group’s leader, the enigmatic Sébastien Saint Germain. When the body of one of the girls from the convent is found in the lair of La Cour des Lions, Celine battles her attraction to him and suspicions about Sébastien’s guilt along with the shame of her own horrible secret. When more bodies are discovered, each crime more gruesome than the last, Celine and New Orleans become gripped by the terror of a serial killer on the loose—one Celine is sure has set her in his sights . . . and who may even be the young man who has stolen her heart. As the murders continue to go unsolved, Celine takes matters into her own hands and soon uncovers something even more shocking: an age-old feud from the darkest creatures of the underworld reveals a truth about Celine she always suspected simmered just beneath the surface.

I love vampires. I was so thrilled when I heard that this book was going to feature vampires and hopefully be the start of their resurgence in YA! It sounded really dark and lush, with a setting that amps up everything the book is going for, and characters who crave things they shouldn’t. All that, with a good dose of murder. It sounded like something different than I normally read, but still something I would want to try!

For a book that was branded The Vampire Book, there were surprisingly little vampires haha. Honestly, I don’t think I would have outwardly guessed vampires if I didn’t know it going into this book. It felt like a steady build toward the end of the book, when the vampire plot line really takes shape and center stage. It seems like it’s setting up the second book to be a lot more vampirey, which I’m looking forward to! Still, I was surprised that this book focused so little on vampires. It felt like subtle vampires until the end.

I actually really, really enjoyed the vampires of this world. They’re shrouded in mystery and covered in darkness. I liked how little was known about them, and the slow build into their reveal. It really worked with the rest of the book and I think it was done really, really well. But I can also see how it could disappoint people when a supposed vampire book is actually very limited on the vampires haha.

The writing was absolutely fantastic. It’s sultry, romantic, dark, lush, and vibrant in a dark way. It captures the essence of the characters, their motives, and the world all at the same time. It flows together so seamlessly and it honestly seemed like something beautiful (pun not intended). This flow also lead to things feeling a bit muddled sometime, though. It’s like things bled into one another and it left me feeling muddled about what was happening. It was like one thing was another and there wasn’t quite a break in between aspects.

I really loved the New Orleans setting. It added so much. Vices and sins and the confines of society. It was such a fantastic place to set this book and Celine really shined here. It fit her character and her development so well.

Speaking of Celine, wow did I like her character. She craves power, but is also afraid of that part of herself. She isn’t fearless, which makes her seem real. She’s a girl who wants to break the confines of society, a girl who wants to be the one making people feel afraid. She doesn’t want to be judged, she wants to be respected. There’s a darkness to her, and it’s written in such a fantastic way. She’s a character who goes for what she wants and doesn’t apologize for it.

I also really loved the friendship between Pippa and Celine! They’re different in ways, but the same in others. I loved how supportive they were of each other and I loved how they came to love each other unconditionally.

Part of Sébastien’s storyline felt a bit off to me. I guess I would have liked to see more of inner workings of his family. It felt like it went too fast, and because of this, I couldn’t fully appreciate it. They were so interesting, and I’m looking forward to hopefully learning more about them.

I’m sort of meh about one plot twist, and intrigued by the other. I think it could play out in multiple different ways, and I don’t know exactly if I’ll like it, but I definitely want to find out. I think it’s going to bring light to the creatures of this world, and I’m looking forward to finding out more.

This book is shrouded in darkness. It has such a great feeling to it and it was really awesome to read. Some plot points might have felt a bit rushed to me, but I enjoyed this book a lot overall. I’m looking forward to more darkness and more of Celine being the person she wants to be.

The Beautiful comes out October 8, 2019! You can add it on Goodreads and pre-order a copy in the meantime!

3 thoughts on “The Beautiful by Renée Ahdieh”