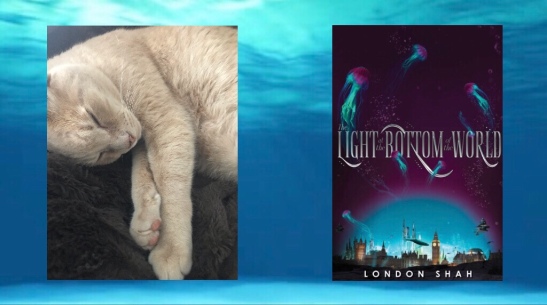 Welcome to Colsten Can’t Wait, which is my verison of Waiting On Wednesday! Every week, my cat and I pick out an upcoming book we’re looking forward to, and highlight it! This week, we picked out The Light At The Bottom Of The World.

At the end of the twenty-first century, the world has changed dramatically, but life continues one thousand feet below the ocean’s surface. In Great Britain, sea creatures swim among the ruins of Big Ben and the Tower of London, and citizens waver between fear and hope; fear of what lurks in the abyss, and hope that humanity will soon discover a way to reclaim the planet. Meanwhile, sixteen-year-old Leyla McQueen has her own problems to deal with. Her father’s been arrested, accused of taking advantage of victims of the Seasickness—a debilitating malaise that consumes people, often claiming their lives. But Leyla knows he’s innocent, and all she’s interested in is getting him back so that their lives can return to normal. When she’s picked to race in the action-packed London Submersible Marathon, Leyla gets the chance to secure his freedom; the Prime Minister promises the champion whatever their heart desires. The race takes an unexpected turn, though, and presents her with an opportunity she never wanted: Leyla must venture outside of London for the first time in her life, to find and rescue her father herself. Now, she’ll have to brave the unfathomable waters and defy a corrupt government determined to keep its secrets, all the while dealing with a secretive, hotheaded companion she never asked for in the first place. As she discovers a world drowning in lies, how much longer can Leyla hold out hope for the truth? If she fails, or falls prey to her own fears, she risks capture—or worse. And her father might be lost forever.

I love all kind of ocean books. I find them terrifying and fascinating. So much of the ocean is unexplored, so a lot of of them are about the unknown, possibly horrifying possibilities of whats down there. This book doesn’t sound like it will be quite like that, but it still sounds like it’s going to be fascinating. The world is underwater. And I find that to be one of the coolest things ever. The people aren’t mermaids, they’re still human, but they have the technology to live completely underwater. And on top of all that, the plot sounds super amazing too. Leyla, the main character, has to enter a submarine race for a chance to find her missing father. She also has to fight a corrupt government and figure out their secrets. Plus, there’s even a disease running through this world called Seassickness. This book sounds like it’s going to be completely packed with so many absolutely amazing things.

The Light At The Bottom Of The World comes out October 29, 2019! You can add it on Goodreads and pre-order a copy in the meantime!