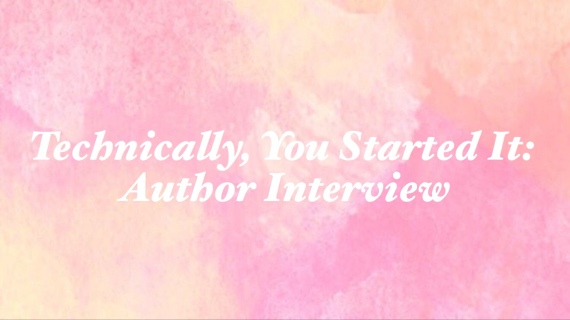 I’m so thrilled to have the author of Technically, You Started It, Lana Wood Johnson, here on my blog for an interview. Her book sounds absolutely incredible. It’s a texting love story, it has a demisexual MC, and it’s case of enemies-to-lovers and mistaken identity! I can’t wait to read it and it was awesome to get a chance to talk with the author!

Before the interview, here’s a bit more about the book, with some links to pre-order! 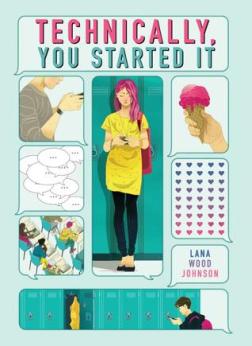 When a guy named Martin Nathaniel Munroe II texts you, it should be obvious who you’re talking to. Except there’s two of them (it’s a long story), and Haley thinks she’s talking to the one she doesn’t hate. A question about a class project rapidly evolves into an all-consuming conversation. Haley finds that Martin is actually willing to listen to her weird facts and unusual obsessions, and Martin feels like Haley is the first person to really see who he is. Haley and Martin might be too awkward to hang out in real life, but over text, they’re becoming addicted to each other. There’s just one problem: Haley doesn’t know who Martin is. And Martin doesn’t know that Haley doesn’t know. But they better figure it out fast before their meet-cute becomes an epic meet-disaster . . .

I’ve always loved texting and digital love stories, but telling a story entirely through texts can be challenging. What were some pitfalls that you experienced when writing with this format?

Punctuation is really important in clarity in a written format, but punctuation in texting is as much a piece of character voice as word choice is. The team at Scholastic has been amazing at working with the eccentricities of the format, but as we got close to the finished version adding extra lines was difficult. I sort of regretted Martin’s hatred of commas when I needed them most.

Haley and Martin sound like two amazing characters! What is your favorite things about each of them?

I love both my nerds so much. My favorite thing about Haley is how invested she gets in everything important to her. If it catches her interest she’s in all the way. This ranges from Martin to geology.

My favorite thing about Martin is how hard he tries to win Haley over. Martin’s the kind of person who has never had to try very hard at anything to succeed, but he realizes pretty early on it’ll take work to change Haley’s mind about ANYTHING and it’s kinda fun to watch him squirm as he starts getting in over his head.

Debuting can be a terrifying experience, but it can also offer a lot of good things as well. What is something that has helped with the experience of releasing your first book into the world?

I strongly recommend every debut convinces one of their closest CPs to debut the year before them so that they’re ready to explain EVERYTHING. I met Adib Khorram about 5 years ago in the query trenches and he’s read all my terrible writing since. It was amazing to watch everyone fall in love with Darius, but really amazing that he learned so much about debuting just in time to help me through it.

Because I also identify as demisexual it’s both exhilarating and scary! I hope they all see themselves in this story and that I don’t let any one down. Each time someone shares that they’re excited because they think they might also be demisexual or they know they are I feel giddy.

What is one thing you love most about your book?

The thing I love most about my book is how I still laugh every time I pick it up. I know it’s weird to laugh at your own jokes, but I can’t help it! There’s something about this particular configuration of my imagination that makes me laugh out loud even when I’m all by myself.

And here’s more about the fabulous author! 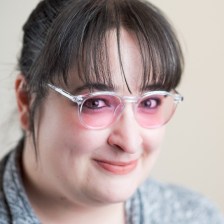 Lana Wood Johnson was born and raised in Iowa in the time before the internet but has spent the rest of her life making up for that. After years working in wireless communication for companies of all sizes, she now works doing the same for a local youth shelter. Lana lives in Minnesota with her husband and their English bulldog. TECHNICALLY, YOU STARTED IT is her debut novel.

Thank you so much to Lana for stopping by my blog! I hope you all enjoyed this interview as much as I did! Technically, You Started It comes out June 25th, which is super soon!