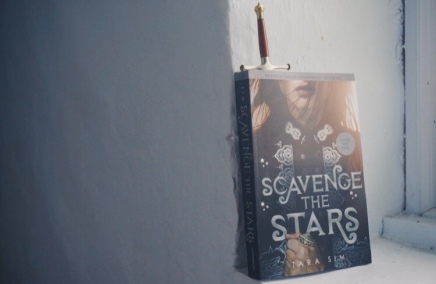 When Amaya rescues a mysterious stranger from drowning, she fears her rash actions have earned her a longer sentence on the debtor ship where she’s been held captive for years. Instead, the man she saved offers her unimaginable riches and a new identity, setting Amaya on a perilous course through the coastal city-state of Moray, where old-world opulence and desperate gamblers collide. Amaya wants one thing: revenge against the man who ruined her family and stole the life she once had. But the more entangled she becomes in this game of deception—and as her path intertwines with the son of the man she’s plotting to bring down—the more she uncovers about the truth of her past. And the more she realizes she must trust no one…

I was really looking forward to this book. The title is awesome, the cover is absouetly gorgeous, and the synopsis sounds really, really intriguing. I love high fantasy worlds with kingdoms and main characters who are vicious and will fight for what they want.

I really enjoyed this book, but I’m not sure if I loved it. The writing is absolutely fantastic. Tara Sim is a fantastic writer and it really showed in the world and in the characters. It makes me want to read her other books even more. Even with the parts of the book I found less interesting than others, I was still intrigued because the writing kept me interesting. It pulled me along and it made the story flow really smoothly.

It almost felt like there were two different parts in this book that were mashed together. There was Amaya’s world, where life is hard and children are sold to debtor ships to work off their parent’s sins. You have to fight for every little scarp and all you can do is survive. And then there was Cayo’s world, full of expansive mansions, fashion, and the casinos of the Vice Sector, the seedy underbelly of Moray. He has his own problems, with his life being torn apart by secrets and feeling like he can’t do anything about it. These two worlds come together, but they just don’t seem to fit. They seem very separate. Their POVs felt so different, which is a good thing and a bad thing. Cayo and Amaya had their own voices, but I felt like their worlds were too separate, even when they were interacting with each other.

I really liked the feel this world had. It felt really expansive and just really cool (great descriptions, I know haha). Though, I did feel like some part weren’t explained enough. I didn’t quite get the overall picture of the world. Moray was very developed and very thorough. I knew it’s problems, it’s downfalls, and what made it work. But with the overall kingdom, I got confused sometimes. I felt like it was sort of explained once and left it at that. Nevertheless, I enjoyed the world. I liked how the geography played a part and how it looks like it’s going to play a part in the next book. I feel like that doesn’t happen in a lot books, so it was cool to see.

I felt kind of disconnected from the characters. Amaya is carrying so much. She has so much pain and anger, but I didn’t quite feel everything. I understood her motives logically, but I wanted more. I didn’t feel her motivation, I didn’t feel why she had to do why she did. It was just explained and that was it. I would have liked to delve deeper into her character and really explore her emotional standpoint. I would have liked for the book to focus on what these characters went through did to them emotionally. Cause it’s brutal.

I really loved how the Amaya and Cayo acted like teens. They’re messy and flawed and don’t really know what they’re doing. They run around acting like they have everything under control and that they know everything, but neither of them do. I really, really loved that aspect. It was so realistic and I loved how they were fighting their own battles and not worried about the rest of the world. The aren’t the best at what they’re doing yet. They are still learning.

I also really liked all the backstory to this book. There is a lot of it and a lot of it essential to moving the plot forward. I think it’s a fine line to walk, having backstory connect so fully with the present and future plot, but it worked alright. I’m not sure how I feel about some things played out. The story can get muddled really fast and I feel like small details might fall through the cracks. Though, I did love how developed the backstory was for all the characters. It set them up really well for what happened in this book and I think for the next.

Character development, besides from most of the backstory, was a little jerky for me. I felt like it wasn’t a smooth rise to the end, but things sort of sputtered here and there. And not in a natural, good messy say. I think it ties into me not connecting with the characters completely fully.

I liked reading this book and I’m looking forward to seeing where the next book goes. It almost feels like this one was a little bit of a set up book. I was expecting there to be more sword fights and more dramatic moments. There was a lot of plotting and characters carrying out their plans through talking. That’s not a bad thing, it just wasn’t what I was expected. This book was really good and I’m looking forward to where the plot heads.

Scavenge The Stars comes out January 7, 2020! You can add it on Goodreads and pre-order a copy in the meantime!

4 thoughts on “Scavenge The Stars by Tara Sim”