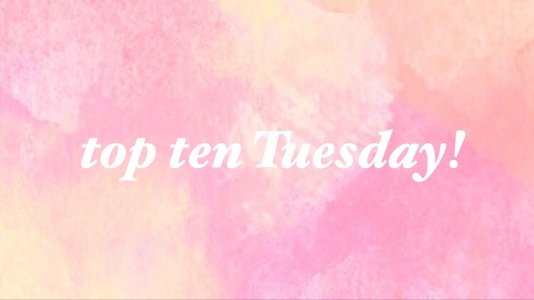 I decided to change the theme for this week just a little bit. I don’t think I would have been able to come up with a lot of characters that remind me of myself, so I thought this would be a good alternative!

Brinna R. Shrum (The Art Of French Kissing, Kissing Ezra Holtz (And Other Things I Did For Science) Characters

I’ve read two of her books so far (I really want to read her others!) and I find her characters so relatable and so real. They showcase mental health in such a real and realistic light and it’s really amazing

Minya from Strange The Dreamer

I find Minya really terrifying in a way. I haven’t read Muse Of Nightmares yet, but I think she’s going to be a big part of it. It’s going to be interesting where her story grows. I don’t now if she’s going to become even more creepy or if she is going grow and become lighter, in a sense.

Rielle and Eliana from Furyborn

Ahh, I love them so much. They’re messy and they’re angry and they fight for everything that they want. They’re so different and yet they compliment each other so well.

Ben from I Wish You All The Best

THEY ARE SO SWEET. And so cute and I really liked reading about their journey with mental health and making friends and dealing with life.

He is just a disaster bi in love with a super cute prince and they make an amazing couple.

The Dragon from Uprooted

I really liked how his character was done. I liked how someone so old and so knowledgeable also managed to be relatable and a character I could fall in love with. Plus, his magic is really cool.

Mei from Descendant Of The Crane

The only reason I’m not putting Mei and not a more of a main character is because I found Mei really interesting. She’s such a minor character and only shows up a couple of times, but she really managed to make an impact on me.

Jac from Ace Of Shades

Bao from Song Of The Crimson Flower

I wasn’t expecting to love Bao as much as I did. He is one of the sweetest guys ever. He’s so nice and he just wants to have a family and belong somewhere. He’s such an awesome character.

Any animal in any book

I tend to fall completely in love with any animal that shows up in a book.

I thought I would be able to come up with characters more easily than I did! I’ve realized that I tend to forget character’s names really easily. I don’t know why! And of course when I wanted to come up with some, they all fled my head haha.

2 thoughts on “Top Ten Tuesday: Characters I Really Like”