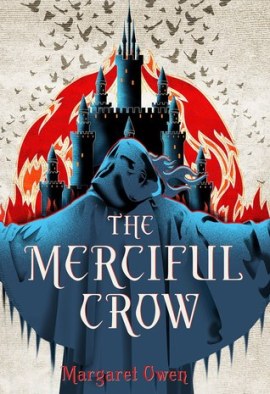 Welcome to Colsten Can’t Wait, which is my version of Waiting On Wednesday! Every week, my cat and I pick out an upcoming book to highlight! This week, we picked out The Merciful Crow.

A future chieftain. Fie abides by one rule: look after your own. Her Crow caste of undertakers and mercy-killers takes more abuse than coin, but when they’re called to collect royal dead, she’s hoping they’ll find the payout of a lifetime. A fugitive prince. When Crown Prince Jasimir turns out to have faked his death, Fie’s ready to cut her losses—and perhaps his throat. But he offers a wager that she can’t refuse: protect him from a ruthless queen, and he’ll protect the Crows when he reigns. A too-cunning bodyguard. Hawk warrior Tavin has always put Jas’s life before his, magically assuming the prince’s appearance and shadowing his every step. But what happens when Tavin begins to want something to call his own?

This book sounds like it’s going to be complicated and have a lot of moving parts. And I definitely want to see how it’s going to play out. Just from the synopsis, the relationships sounds tangled enough that I don’t even really want to think about how I would untangle that mess haha. But I think it’s going to make for a really great book. I’m not sure why crows are becoming a pretty big thing in YA these days, but I think it’s cool. And these crows are a group of mercy-killers, which sounds like it’s going to fascinating. And then there’s going to be a bodyguard who wants to take things for himself, which sounds like its going be awesome to watch play out. I’m all for underestimated characters taking what they think they deserve and I’m looking forward to seeing Tavin plot away. Dunno if his plans are going to work though cause Jas sounds like he isn’t unfamiliar with plotting himself. And I’m definitely looking forward to seeing Fie be awesome.

The Merciful Crow comes out July 30th, 2019! You can add it on Goodreads and pre-order a copy in the meantime!