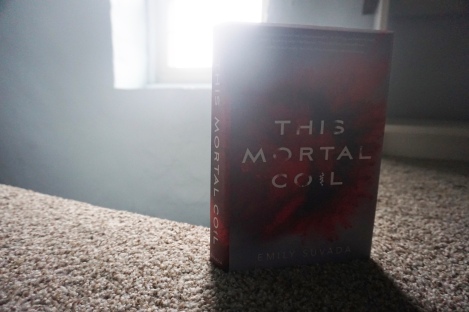 Catarina Agatta is a hacker. She can cripple mainframes and crash through firewalls, but that’s not what makes her special. In Cat’s world, people are implanted with technology to recode their DNA, allowing them to change their bodies in any way they want. And Cat happens to be a gene-hacking genius. That’s no surprise, since Cat’s father is Dr. Lachlan Agatta, a legendary geneticist who may be the last hope for defeating a plague that has brought humanity to the brink of extinction. But during the outbreak, Lachlan was kidnapped by a shadowy organization called Cartaxus, leaving Cat to survive the last two years on her own. When a Cartaxus soldier, Cole, arrives with news that her father has been killed, Cat’s instincts tell her it’s just another Cartaxus lie. But Cole also brings a message: before Lachlan died, he managed to create a vaccine, and Cole needs Cat’s help to release it and save the human race. Now Cat must decide who she can trust: The soldier with secrets of his own? The father who made her promise to hide from Cartaxus at all costs? In a world where nature itself can be rewritten, how much can she even trust herself?

I’d seen this one around quite a bit and a lot of people seemed to really like it. I got a copy around when it came out, I think, and I’d just never gotten around to reading it. Though, I did end up picking it up randomly haha. I guess I was in the mood for some coding, hacking, and DNA.

I’m not quite sure where to start. The world is absolutely incredible. I don’t think I’ve read anything like it and it blows my mind to think about how expansive and how well-thought out it is. Hydra, the disease, is so incredibly unique. I found it fascinating to learn about. I loved how everything tied together to make things possible. I’m not fluent in code or biology at all, but I was able to have a firm grasp of what was going on and why.

I also adored Catarina. She was strong, she was brave, and she was fierce. So much happened to her, but she still wanted to keep going and she still wanted fight. I admire her strength so much. I feel lucky to have gotten to know her character. She is so complex, in a lot of ways, but I still felt like her character was grounded in her core, in what makes her, her. She might have been flailing about sometimes, but I still felt like I knew her, at least a little bit.

There was a lot of info dump in a lot of places. This book requires it since I looks so closely at code and DNA and all that good stuff. Yet, I didn’t find myself getting confused, bored, or overwhelmed. I actually found all the information being thrown at me really interesting and I was able to understand and keep everything organized. And considering how complicated the plot is and how much I had to keep organized there, it’s amazing how smoothly this book runs.

While I a lot of aspects of this book so deeply, there were a few things that rubbed me the wrong way. I did not enjoy Cole’s character. At all. He seems so bland to me. He doesn’t seem like he’s anything more than the love interest. And not a very interesting one at that. I’m disappointed that he couldn’t be more. He just seems like he’s there and I don’t feel his hopes and dreams. To me, it just seems like he’s going through the motions the story is putting him through.

There were so many plot twists in this book. And a lot of them were very well done. I could guess parts of them or maybe have a few snippets of an idea, but the full blown thing was always a surprise for me. I never felt like anything was fully explained, I always knew there was more to the story. And I really enjoyed that! Though, there was one twist I was not a fan of. It sort of through off characterization for me and the foreshadowing was just a hair off for me. I’m not the biggest fan of it, but I think it goes into more depth of this certain plot point more in the second book, so I’m holding off from judging too harshly until I read that one!

Overall, this was a brilliant book with brilliant writing, brilliant storytelling, and a spectacular main character. This story is so complex and I’m honestly in a little awe of how well the author wrote it. There are a few things I’m not sure about, but I’m still planning on reading the second book and seeing how the story progresses!

You can add This Mortal Coil on Goodreads and order a copy of your own!

3 thoughts on “This Mortal Coil by Emily Suvada”