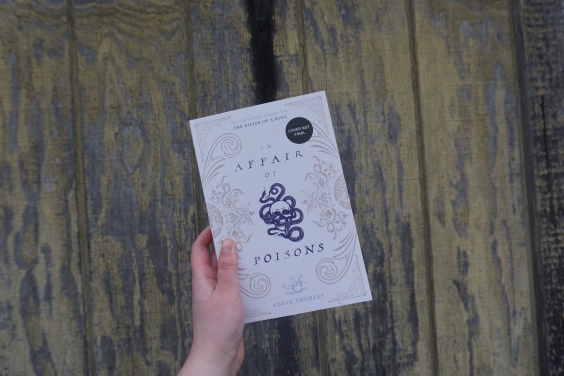 After unwittingly helping her mother poison King Louis XIV, seventeen-year-old alchemist Mirabelle Monvoisin is forced to see her mother’s Shadow Society in a horrifying new light: they’re not heroes of the people, as they’ve always claimed to be, but murderers. Herself included. Mira tries to ease her guilt by brewing helpful curatives, but her hunger tonics and headache remedies cannot right past wrongs or save the dissenters her mother vows to purge. Royal bastard Josse de Bourbon is more kitchen boy than fils de France. But when the Shadow Society assassinates the Sun King and half the royal court, he must become the prince he was never meant to be in order to save his injured sisters and the petulant Dauphin. Forced to hide in the derelict sewers beneath the city, any hope of reclaiming Paris seems impossible—until Josse’s path collides with Mirabelle’s, and he finds a surprising ally in his sworn enemy. She’s a deadly poisoner. He’s a bastard prince. Together, they form a tenuous pact to unite the commoners and former nobility against the Shadow Society. But can a rebellion built on mistrust ever hope to succeed?

Poisons and a girl who unwittingly murders a king. I was definitely interested when I read that. I was lucky enough to receive and ARC from the publisher (which is nuts and I still can’t quite wrap my brain around!!!), so thank you to Page Street Kids!

For the first 50ish pages of this book, I wasn’t sure if I was going to like it. The pacing was off and I had a hard time getting used to the writing. The beginning is a lot of set up and a bit of an information dump, but once everything gets settled and the main plotlines kick in, I really started to enjoy it.

While historical fiction and I don’t always get along, I really did enjoy this one. It leans heavily on the fantasy elements! The use of alchemy and a little bit of magic were really awesome and I liked how they tied in to the story. I also wasn’t aware of the historical events this book is based on, which probably helped me enjoy it more.

The romance was also a highlight for me. I was starting to think I wasn’t as big as a fan of the enemies-to-lovers trope as I thought, but I just like it when it’s done well. And this is done well. The tension between the two characters and their snipes at each other were fantastic. I would honestly read a book about their everyday lives together.

I personally feel like at parts, the emotional aspect could have been heightened. There were parts that I could see were supposed to be heartbreaking but… I didn’t really feel it. Part of it could be there was big tragedy after big tragedy and they weren’t treated like a big tragedy for long enough. I found myself being surprised at stuff that happened, because I didn’t feel like it was necessary. Plus, I feel some of them were brushed over. While I know things have to move on, I don’t think the amount of grief some characters felt correlated with what happened.

I fell in love with Mirabelle and Josse. I loved both of their characters so much. They both have POVs and while they are both fighting for the same thing, they both have different journeys to go on. I really enjoyed how they had their own issues and their own sense of self, while their stories also intertwined with each other. I think it was masterfully done and I feel like the story was significantly strengthened by being inside both of their heads.

I had a few issues with this book, but I did really, really like. I enjoyed myself enough to ignore the issues I had!

An Affair Of Poisons comes out February 26th, 2019! You can add it on Goodreads and pre-order a copy in the meantime!