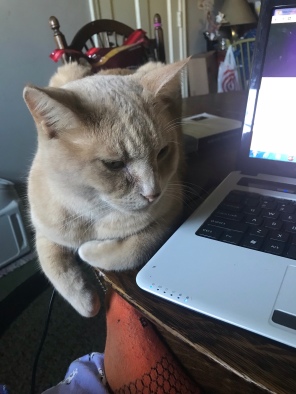 Welcome to Colsten Can’t Wait, which is my version of Waiting on Wednesday! Every week, my cat and I pick an upcoming book we’re excited for and highlight it! This week we picked An Affair of Poisons.

After unwittingly helping her mother poison King Louis XIV, seventeen-year-old alchemist Mirabelle Monvoisin is forced to see her mother’s Shadow Society in a horrifying new light: they’re not heroes of the people, as they’ve always claimed to be, but murderers. Herself included. Mira tries to ease her guilt by brewing helpful curatives, but her hunger tonics and headache remedies cannot right past wrongs or save the dissenters her mother vows to purge. Royal bastard Josse de Bourbon is more kitchen boy than fils de France. But when the Shadow Society assassinates the Sun King and half the royal court, he must become the prince he was never meant to be in order to save his injured sisters and the petulant Dauphin. Forced to hide in the derelict sewers beneath the city, any hope of reclaiming Paris seems impossible—until Josse’s path collides with Mirabelle’s, and he finds a surprising ally in his sworn enemy. She’s a deadly poisoner. He’s a bastard prince. Together, they form a tenuous pact to unite the commoners and former nobility against the Shadow Society. But can a rebellion built on mistrust ever hope to succeed?

There has been a surge of alchemy books recently and I am READY. While I’ve never really thought about alchemy before, it does sound really, really interesting! And this one is about poisons, which is even better. Unwittingly poisoning a king, assassinations, tedious alliances? HECK YES. This book sounds so different than other kingdom books I’ve read and I’m pumped to see where it will go. Most characters are the ones who want to kill the king, but Mira isn’t. I can’t wait to see that play out and how she handles being a part of that. Josse also sounds like such an interesting character. I can’t wait to get to know him better. Plus, this cover adds so much! It feels like the kind of cover you would see on an alchemy textbook and I think its freaking awesome! I cannot wait to read this book and in all it poisonous glory.

An Affair of Poisons comes out February 26th, 2019! You can add it on Goodreads and pre-order a copy in the meantime!