It’s part 2 of my series series! (Admit it, the name is growing on you haha.) In this part, I’m going to be talking about all the series I read when I was younger, 9-11ish (heavy on the ish), and never ended up finishing. I read most of these in that awkward phase where I wasn’t juuuuuuust ready for YA, but was definitely starting to get there. That made me move on from these books by the time the sequels came out. And some of these I just didn’t finish because I didn’t like them.

The Books of Elsewhere by Jacqueline West

Oh, these books were so good. It’s about a girl, Olive, who can travel into paintings. She can’t stay too long, or else she’ll turn into paint herself. It’s got a creepy old house, good friendships, and amazing settings. I got up to book 3 or 4 before I stopped reading them. These books were the kind of creepy that someone who craves that kind of stuff but gets freaked out easily would be able to enjoy. I’m so hoping I actually finish off this series someday!

The 39 Clues by Rick Riordan

This is one of the series I stopped simply because I lost interest. I’m not even sure how far I got. Maybe book 5? I tried to look up spoilers awhile later and everything so confusing? The storyline got so convoluted and I just don’t even know what happened.

The Sisters Grimm by Michael Buckley 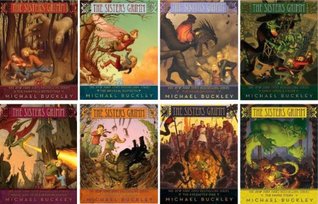 I think I was really close to finishing this series, but I just never got around to it. This world is actually really interesting and has a lot of good plot points. There is some stuff I remember terrifying me for a good long while, but it was actually really well done! I do wonder how this one ended. Maybe I’ll look up spoiler, maybe I’ll actually read them. Who knows!

I remember loving this book so much. I’m pretty sure this was the first woods book I really liked! I thought it was a standalone, but was so pumped when I found out another book was coming out! The second book was really different from the first. There were multiple POVs and I only really enjoyed one of them. I ended up not finishing it and just cutting my loses.

The Unwanteds by Lisa McMann

Oh, I remember the horror of finding out this was going to be a seven book series and realizing how long I would have to wait for the next book. This was my first brush with falling in love with a longer series that only has a few books out. I’ve read the first two and it has a really good plot, solid characters, and an amazing world. I don’t remember much, but I do remember that it was put together really well. Unfortunately, by the time the third book came out, I never found the time to read it or any of continuing books.

I’ve been reading solidly in YA with a few Adult books sprinkled in for a good while now and I’m thinking I would like to take a dive into a few middle grade books sometime! I’ll probably finish up some of my unfinished series and then take a look at some new ones. It should be interesting to see how much they’ve changed since I was younger and how differently I view them!